Winner of the 2015 Anni and Heinrich Sussmann Artist Award 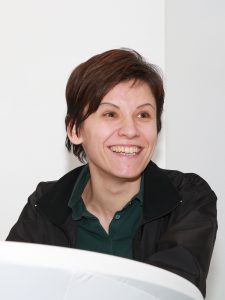 Marina Naprushkina , born in 1981 in Minsk (Belarus), living in Berlin, is an artist and activist. Deals with the relations between society, politics and art – as well as a highlighting human rights abuses through her artistic work and activities.

The emphasis of her Practice lies on project work outside the white cube, In the public sphere, and has social and political relevance, examining the current regimes with the use of both artistic, social and political means as well as in disseminating her ideas to a broad public, engaging all social groups, from intellectuals to the working class.

In her practice, Naprushkina engages in a critical analysis of today’s Belarus, attempting to affect change as well as encouraging civic participation and a broader democratic society.

In 2007, Naprushkina founded the Office for Anti Propaganda. Started as an archive of political propaganda the “Office“ drifted to become a political platform the with cooperation with activists and cultural makers initiates and supports political campaigns, social projects, organises protest actions, and publishes underground newspapers.

The project Refugees’ Library (2013–2014) (www.refugeeslibrary.wordpress.com) documents refugees’ legal proceedings. It is a collaborative project bringing together several volunteers working on translations of court proceedings in the languages of the refugees. The main intention of the project is to provide the refugees with information resources in order to prepare their own cases. encourage discussion about German and European asylum and migration policies.

In 2013 Naprushkina founded a Neue Nachbarschaft //Moabit (New neighborhood//Moabit): the neighborhood initiative to support refugees. The initiative offers activities such as German courses, childcare and sports courses for the refugees and is one of the largest initiative in Berlin supporting refugees. More information on www.neuenachbarschaft.de