Nominees for the 2016 Anni and Heinrich Sussmann Artist Award Copy

The winner artist(s) will be chosen from a shortlist of nine Artist(s) recommended by a diverse group of advisers who were selected based on their commitment to the principles of the Anni and Heinrich Sussmann Foundation Continuing the legacy of the Foundation. The group of advisers choose you as one of the nine. On the 9th of November 2016, we will announce the winner at a press conference in Vienna.The Winner will receive 5000 Euro award for their current artistic work. 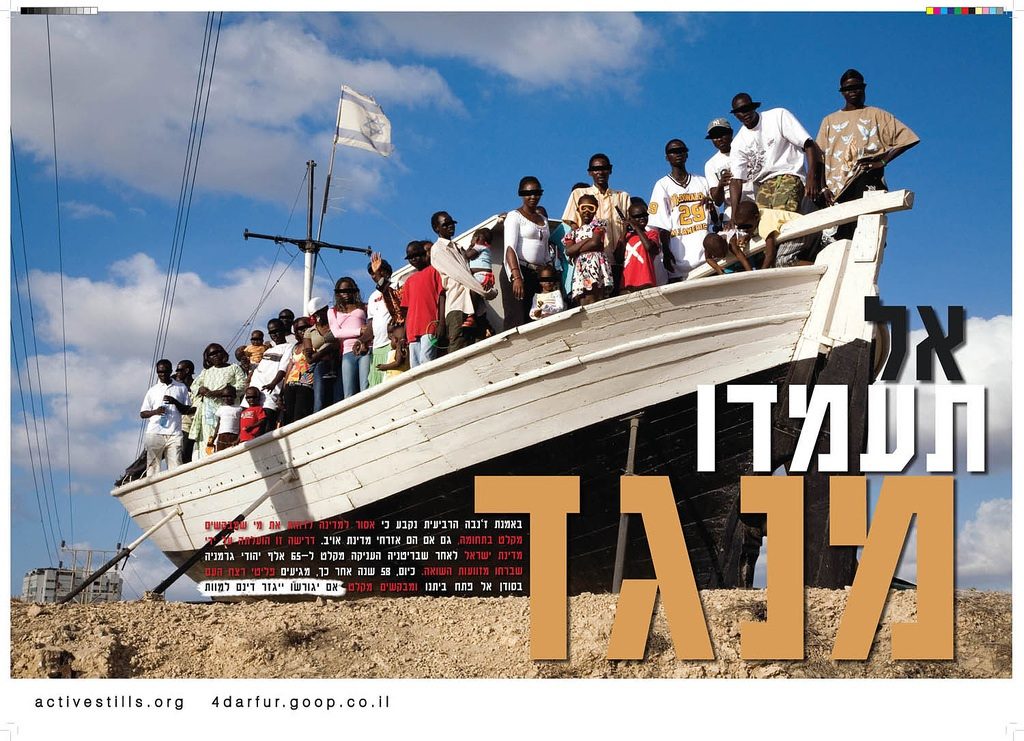 Activestills collective was established in 2005 by a group of documentary photographers out of a strong conviction that photography is a vehicle for social and political change. We believe in the power of images to shape public attitudes and raise awareness on issues that are generally absent from public discourse. We view ourselves as part of the struggle against all forms of oppression, racism, and violations of the basic right to freedom. The collective – that members Israeli, Palestinian and international photographers – operates in Palestine/Israel and focuses on social and political documentation, publications, and exhibitions. We work on various topics including: the Palestinian popular struggle against the Israeli occupation, rights of women, LGTBQ, migrants and asylum-seekers, public housing, and other forms of economic oppression. Israeli public opinion is shaped first and foremost by the mainstream media that is becoming more racist and inciting. The impact of this process is evident in increased public support for violent military operations, racist legislation, and discriminatory policies. We wish to challenge this state of affairs by producing work that exposes inequality and conveys messages that contest oppression and brings the voices and images of those who are invisible and unheard into the public discourse. Our collective is based upon the belief that mutual work serves each photographer’s personal expression, and that joint projects create powerful shared statements. We believe that the photos we take belong to those whose struggles are documented, and thus we share our archive with different activist groups. Our photos are often exhibited by local communities at events, conferences, demonstrations, and court hearings. Our images are frequently published in alternative and leading media as well as by human rights, development, and advocacy agencies. In solidarity with the Palestinian people’s struggle for their inalienable rights, Activestills calls for: The end of Israel’s ongoing illegal occupation and colonization of Palestinian and Syrian territory, and the removal of the Israeli separation wall; The end of institutionalized discrimination against non-Jewish citizens of Israel, and respect for the human rights of all, regardless of ethnicity; Recognition and implementation of the rights of Palestinian refugees according to UN Resolution 194, including the right of return; Prosecution of those responsible for war crimes. 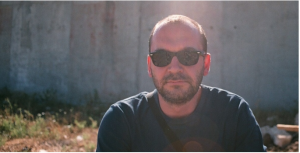 Visual artist, born on the 26th of May, 1966 in Warsaw. His works make reference to (displaced) individuals and societal trauma. At first glance, his images appear to be strictly documentary photographs and video, yet the artist’s analytical staging becomes clearly recognizable through the selection of images during the editing process.

Żmijewski does not shy away from putting the generally accepted rules of Political Correctness into question. His works on the mentally and physically handicapped has drawn significant public attention. He appears to be an artist always in constant search of the next modality of artistic expression, ever striving to amplify the impact of his art on its subjects, enlarging its territory beyond its conventional borders.

Having studied sculpture at first, he went on to continue in film and photography, a medium he found more suitable to represent the contemporary world around him and its accompanying challenges. During the 1990s, Żmijewski was a leading force in the realm of critical art, his point of departure being the problems of body and The Other. He summed up this period in his manifesto, Applied Social Arts, developing a fresh attitude of social activism. Żmijewski’s more recent works continue to manifest this new approach.
http://culture.pl/en/artist/artur-zmijewski 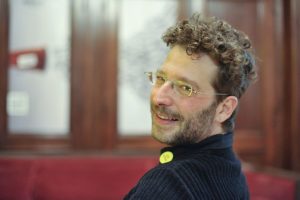 Dimitris Bavellas was born in Neos Kosmos, Athens. He studied film direction at the Stavrakos Film School in Athens, Greece. In 2005 he was awarded a scholarship for postgraduate studies abroad from the State Scholarship Foundation. He graduated with distinction for his MA in Film and Moving Image Production (specialization Film Direction) at the Northern Film School (Leeds, UK) in 2008 and spent sometime in the country while working as a director. He has directed several short films that have traveled to Festivals all around the world such as Fresh Film Fest (Karlovy Vary), Emergeandsee (Berlin), Leeds Film Festival (England) etc. His first feature film RUNAWAY DAY had its World Premiere in the Competitive Section of the 19th Sarajevo International Film Festival. Then it was screened in Viennale 2013 (Vienna International Film Festival), in the 68th Edinburgh Film Festival (UK Premiere) and up to more than 30 Festivals around the world. The film won the Alphaville Award in Feature Films for Best Foreign Feature in the 23rd Annual Berkeley Video & Film Festival 2014 and the Award for Best Directing at The Gulf of Naples Independent Film Festival 2015.
https://pro.festivalscope.com/director/bavellas-dimitris 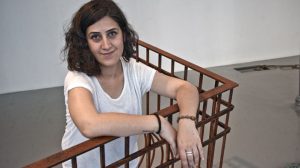 Hera Büyüktaşçıyan locates the figure of the other between the twinned spectres of absence and invisibility in order to weave connections between identity, memory, space and time. She works as a storyteller, integrating metaphors from local myths, historic and iconographic elements of different geographies to open up new narrative scopes. Water is a recurring theme in her practice, referring to what the artist understands as the fluid, aquatic nature of memory. Her most recent works enquire into the meaning of ‘absence’ within collective memory. There is a focus on urban transformation and the disappearance, invisibility and sense of isolation it causes.

She lives and works in Istanbul, Turkey.
http://herabuyuktascian.blogspot.co.il/?view=magazine 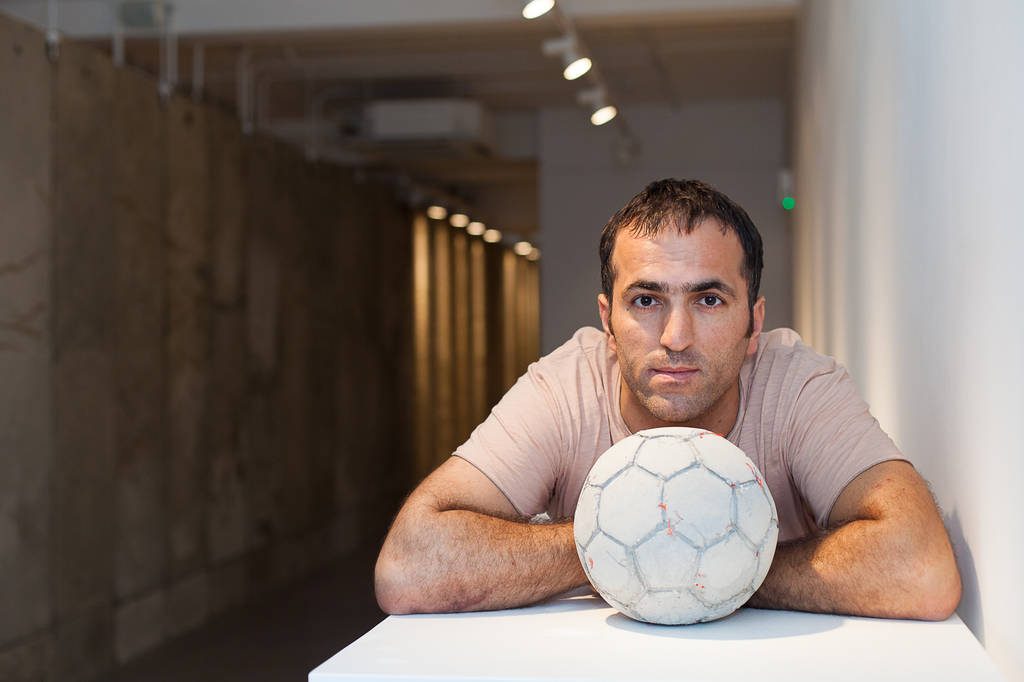 With photographs, videos, installations, films, and performances that are focused on his native Palestine, multidisciplinary artist Khaled Jarrar explores the impact of modern-day power struggles on ordinary citizens while seeking to maximise the social potential of artistic interventions. Over the last decade, Jarrar has used the subject of Palestine, particularly the Israeli occupation of the West Bank, as a starting point for larger investigations of militarised societies, including the gendered spaces of violence and the links between economic and state powers that fuel and profit from war or political conflict.  Jarrar’s bold, and sometimes controversial, projects often include various media and have earned him international recognition, most recently as the recipient of the 2016 Anni and Heinrich Sussmann Award. In 2007, for example, he displayed photographs of the Howarra and Qalandiya checkpoint in plain sight of Israeli soldiers at the border. Other projects such as his Live and Work in Palestine passport stamps and his award-winning documentary film The Infiltrators (2012), subvert the dominant narrative of an equally fought, two-sided conflict by highlighting the limited mobility of ordinary Palestinians who struggle to have access to basic things such as healthcare, education, or travel documents.  In seeking to engage a wide audience through public performances and interventions, Jarrar has also presented his multilayered projects abroad. On the streets of Helsinki, Finland he built a temporary Hunger Wall in 2014, a barrier composed of loaves of bread that symbolises the thin line between prosperity and poverty, particularly under military occupation. With Dis-/Obey, he invited dozens of volunteers to participate in a military march that ultimately placed them in opposition to Jarrar’s voiced orders and an installation of camouflage uniforms. Commissioned by Checkpoint Helsinki as part of the Helsinki Festival, Dis-/Obey investigates military power, disobedience, and individual responsibility in conflict zones. Jarrar’s Upcycle the Wall series, which has been shown internationally at such venues as the Aga Khan Museum, is perhaps his most well-known project to date and draws attention to the occupation of Palestine with sculptures made of reconstituted concrete from the apartheid wall that illegally annexes and cuts through parts of the West Bank. These works were highlighted in a critically acclaimed exhibition at Ayyam Gallery London in 2013 that included the installation of a massive concrete partition and related photographs.  Recently, Jarrar was highlighted by a number of international publications such as The Guardian, Los Angeles Times, and Creative Time Reports for his artistic intervention at the U.S-Mexico border. There, he removed and reappropriated a piece of the partition in order to create a ladder that now stands as a symbolic means of crossing for Mexicans who are separated from their American relatives.

Born in Jenin in 1976, Khaled Jarrar lives and works in Ramallah, Palestine. Jarrar completed his education in Interior Design at the Palestine Polytechnic University in 1996, and graduated from the International Academy of Art Palestine with a Bachelor in Visual Arts degree in 2011. The following year, his documentary The Infiltrators (2012) won several accolades at the 9th Annual Dubai International Film Festival, and confirmed his importance in global cinema. 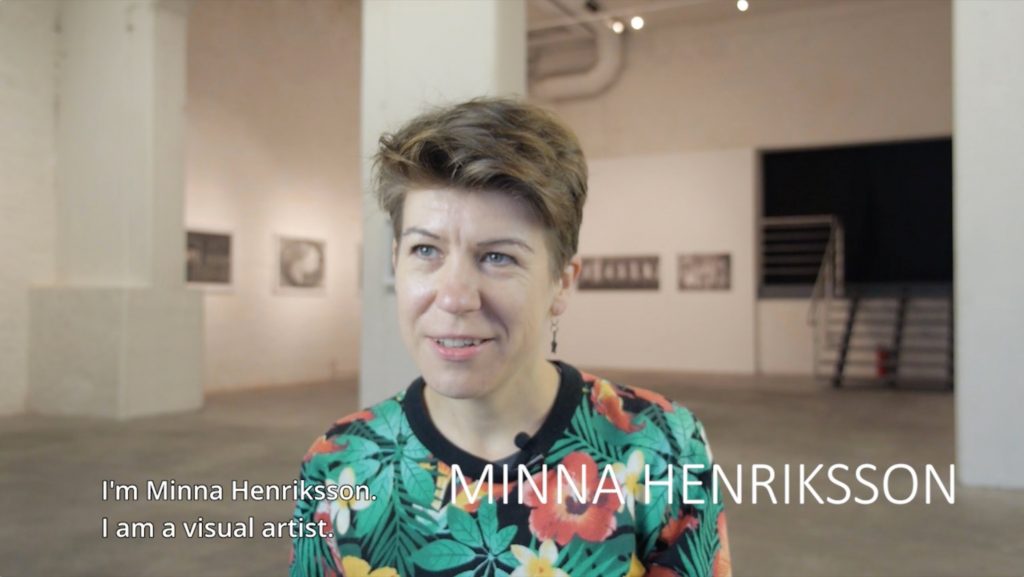 Minna Henriksson (b. 1976, Oulu) is visual artist currently living in Helsinki. She often deals with hidden and underlying politics in seemingly neutral and natural processes. Her main artistic mediums are text, drawing and photography. She has an ongoing theoretical engagement on nationalism together with Sezgin Boynik since 2006.  Henriksson has produced permanent public artwork in Trabzon, Turkey, and has, among other places, exhibited in Helsinki, Belgrade, Pristina, Ljubljana, Zagreb and Istanbul. Recent exhibitions include works at the Lenin Museum in Tampere, Finland; and in the 2nd Tbilisi Triennial, Tbilisi.
http://minnahenriksson.com/ 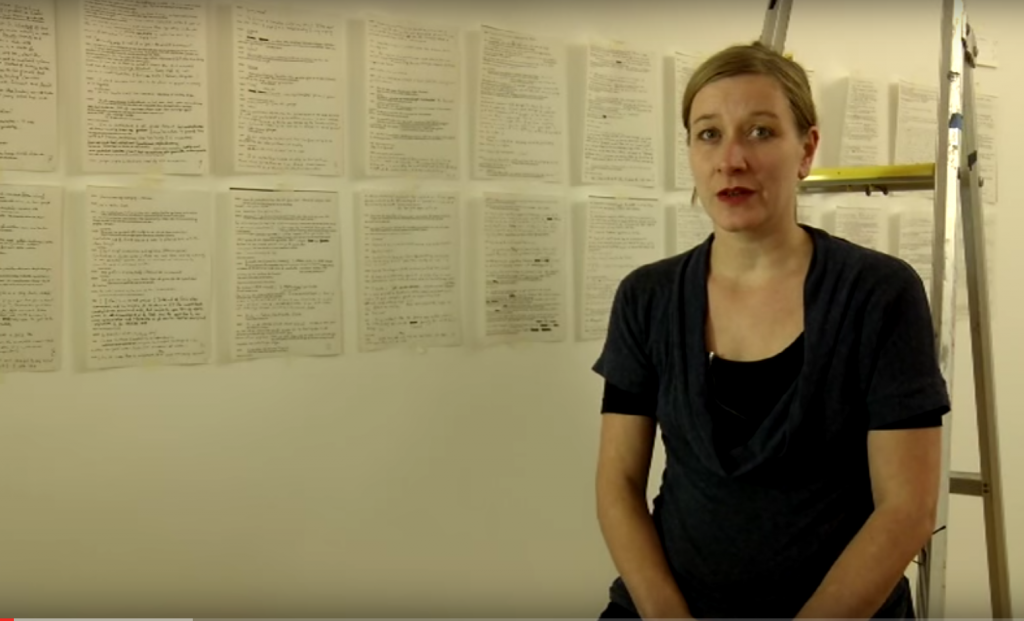 In her recent works, Nicoline van Harskamp uses varieties of internationally-spoken English to propose a future shaped by the ubiquity and constant evolution of the language, and its inevitable divergence from hegemonic norms.  Devised with actors, students, and sometimes linguist, van Harskamp’s performative actions (such as English Forecast), plays (A Romance in Five Acts and Twenty-one Englishes), documents and video works bring out the correspondence between content and the aesthetic framework in which it comes into force. 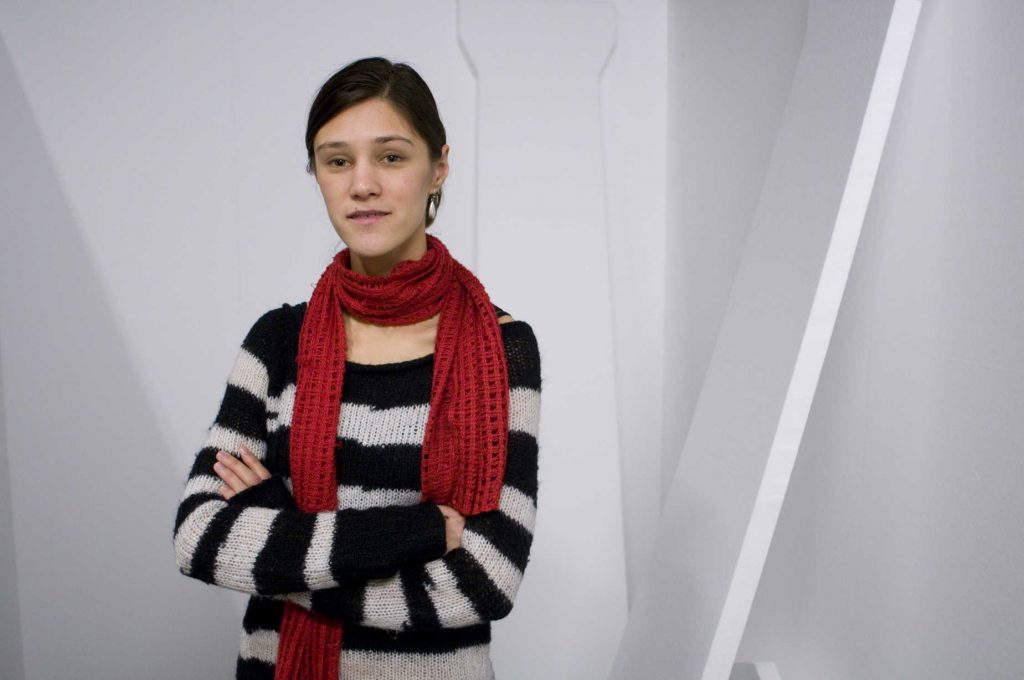 Olga Jitlina was born in 1982 in Leningrad, now Saint-Petersburg, where she also currently resides. She graduated form The University of Jewish Studies where she studied philology and the Russian Acadamey of Art in 2007 where she studied theory and history of art. For several years, Olga Jitlina has worked with labor migrants in Russia and Central Asia developing Utopian scenarios of national politics, which serves as inspiration for her art.
http://www.olgajitlina.info/sample-page/ 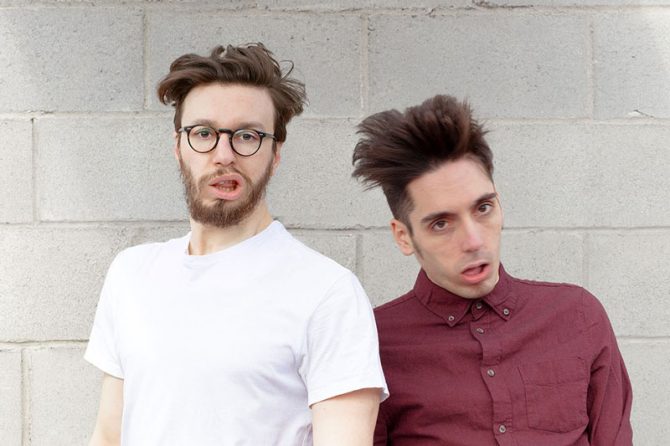 The Cool Couple (often shortened TCC) is an artist duo based in Milan, Italy, and established in late 2012 by Niccolò Benetton (1986) and Simone Santilli (1987). Their research focuses on the friction points that generate daily in the relationship between people and images. The idea of images as active hubs in a network, combined with a strong planning attitude, result in the use of several forms of expression, ranging from fine art photography to electrostatic wipes, from meditation rooms to Chinese cover-bands.
TCC’s work has been exhibited internationally at institutions such as: Center for Contemporary Strozzina (Florence), Fondazione Bevilacqua La Masa (Venice), Unseen Festival (Amsterdam), Centquatre (Paris), Les Rencontres des Arles Festival and MACRO Museum (Rome).
Among the prizes they won are Francesco Fabbri Award for Contemporary Photography, Fondazione Bevilacqua scholarship, Graziadei Prize, Euromobil Under 30 Prize. They have been selected for Plat(t)form Program at Fotomuseum Winterthur and shortlisted for the Discovery Award at Les Rencontres des Arles festival.
The Cool Couple have been lecturers at: NABA (Milan), IUAV University (Venice), AplusA gallery (Venice), University of South Wales (Newport), IED Turin. They are founders of trendsetting cover band Rui & the Rainbow Dragons, members of POIUYT, a platform for image-based research, and among the editorial team of Genda Magazine.
http://thecoolcouple.co.uk/who-we-are/