The Sussmann Foundation Committee 2019 is made up of the following persons:

Born in 1981 in Minsk (Belarus), living in Berlin, is an artist and activist. Deals with the relations between society, politics, and art – as well as highlighting human rights abuses through her artistic work and activities.

The emphasis of her practice lies on project work outside the white cube, In the public sphere, and has social and political relevance, examining the current regimes with the use of both artistic, social and political means as well as in disseminating her ideas to a broad public, engaging all social groups, from intellectuals to the working class. In her practice, Naprushkina engages in a critical analysis of today’s Belarus, attempting to affect change as well as encouraging civic participation and a broader democratic society.

In 2007, Naprushkina founded the Office for Anti Propaganda. Started as an archive of political propaganda, the “Office” drifted to become a political platform in cooperation with activists and cultural makers initiates and supports political campaigns, social projects, organizes protest actions, and publishes underground newspapers.

In 2015 Naprushkina was awarded with the Anni and Heinrich Sussmann Award of artistic work committed to the ideal of democracy and antifascism. 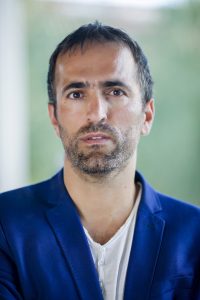 Born in Jenin in 1976, Khaled Jarrar lives and works in Ramallah, Palestine. Jarrar completed his education in Interior Design at the Palestine Polytechnic University in 1996 and graduated from the International Academy of Art Palestine with a Bachelor in Visual Arts degree in 2011. The following year, his documentary The Infiltrators (2012) won several accolades at the 9th Annual Dubai International Film Festival and confirmed his importance in global cinema.

In 2016 Jarrar was awarded with the Anni and Heinrich Sussmann Award of artistic work committed to the ideal of democracy and antifascism. 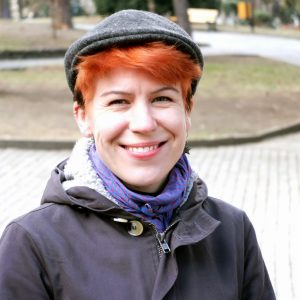 (b. 1976, Oulu, lives in Helsinki) is a visual artist who works with a disparate range of tools including text, drawing, linocut and photography. She studied art in Brighton, Helsinki and Malmö. Her work is often collaborative, and relates to the anti-racist, leftist and feminist struggles. In the recent years her work has often dealt with archives and histories. Her work is research based and engages with covert political processes that appear to be neutral or natural.

Among her recent works are an installation addressing the history of race science in Nordic countries, investigation into the swastika symbol in Finland and its uses and meanings historically and today, observations of the relation of occultism and racism through the work and legacy of Nicholas Roerich, and a series of lino prints about struggles by paper industrialists in Finland against leftist organising and for profiting from the South African apartheid regime. Since 2006, Henriksson has had an ongoing theoretical engagement on contemporary art and nationalism together with Sezgin Boynik focusing on the Balkan and Nordic regions.

Henriksson has exhibited her work broadly in international exhibitions, among others in the 3rd Actually, the Dead Are Not Dead, 3rd Bergen Assembly; Stasis – Taking the Stand, 7th Thessaloniki Biennial; Time Is Now, 2nd Wuzhen Contemporary Art Exhibition; Tunnel Vision, 8th Momentum – Nordic Biennial for Contemporary Art; The Lenin Museum in Tampere; History Unfolds in Swedish History Museum, and at the online platform of documenta studies in Kassel.

In 2017 Henriksson was awarded with the Anni and Heinrich Sussmann Award of artistic work committed to the ideal of democracy and antifascism. 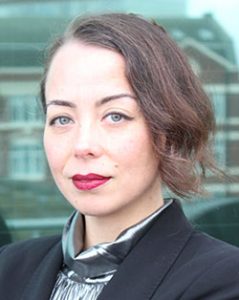 An independent curator and writer. Her main interests are image politics and contemporary art in and from the Middle East. Recent exhibitions include Spectral Imprints for the Abraaj Group Art Prize in Dubai (2012); This is the time. This is the Record of the Time at Stedelijk Museum/American University of Beirut Gallery (2014/15); the A.M. Qattan 2016 Young Artist of the Year Award at Qalandiya International in Ramallah and The Mosaic Rooms in London; Neither on the Ground nor in the Sky at ifa Gallery Berlin (2019).

Co-Founding Director and Curator of Perpetuum Mobile and an internationally active curator, writer, and theorist. He received a joint honor in Philosophy and Mathematics at Bristol University and completed his MRes at the London Consortium (Birkbeck, Tate, BFI, ICA). His doctoral research at Helsinki University was centered on the Russian cultural underground of the 80s and 90s. During his time in academia, he was a CIMo and Ehrenrooth Fellow and worked for several years at the Alexander Institute. Prior to this, he worked in global media as Associate Editor of Project Syndicate, ‘The World’s Opinion Page.’ Earlier, he co-founded alternative art projects and spaces in London, Vienna, and St. Petersburg. Today, aside from curating and institution-building, Ivor is an editor and contributor to journals and publications and a speaker on art, politics, and philosophy.

Ivor has curated exhibitions and events at international biennials including the Arts Assembly (Manifesta, Murcia 2009), the Perpetual Pavilion (Venice Biennale 2009), the Street Art Assembly (Ekaterinburg Biennale 2012), Re-Aligned+Media Impact (Moscow Biennale 2013), the School of the Displaced (Kiev Biennial, 2015) and the AR Pavilion (Athens Biennale, 2017), along with participation as a speaker at others, including Dak’Art (Senegal, 2016). Museum shows include “The Raw, The Cooked and the Packaged – The Archive of Perestroika Art” at Kiasma – Museum of Contemporary Art Helsinki(2007), “Re-Aligned Art from Russian, Ukraine and Belarus” at Tromsø Kunstforening (2013) and the series “Outside Insiders– Pluriculturalism in Contemporary Art and Culture” at Moderna Museet Malmö (2013-2014). In public space, Ivor has curated events such as “Re-Public – Russian Art in the Streets” (Kiasma, Urb Festival 2013), and the 10-day “To the Square 2” (Checkpoint Helsinki/Helsinki Festival, 2014) and “Safe European Home” (Hungaricum, Berlin, 2014). He has also contributed to galleries and art-spaces such as Another Vacant Space (2009), Momentum (Kunstquartier Bethanien, Berlin 2014), and Forum Box (Helsinki 2014). He has taught and held workshops at academies, including CAFA (Beijing 2011), Aalto University (Helsinki 2011), and the Beaux-Arts (Paris 2012). 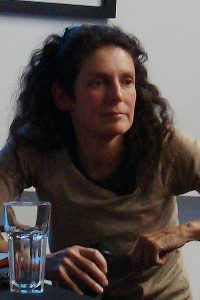 Works with film, video, installation, and directs performances. Her film work attempts to re-invent and question the form, often incorporating aspects of chance operations. Sussman’s whiteonwhite:algorithmicnoir is a film which edits live as you watch and never repeats the same way twice. Last year, 89 seconds at Alcázar, a signature piece based on “Las Meninas,” was ‘atomized’ –– broken into 2304 pieces and made available on the blockchain through Snark.art, allowing hundreds of people to share the artwork. Most recently, Eve has been directing a dance piece, Madison Color Theory, that has no locked choreography; the instructions channeled live to the performers. Together with Simon Lee, Sussman co-founded the Wallabout Oyster Theatre, a micro-theatre run out of their studios in Brooklyn. They have been developing new channeled performance works, including …and all the reporters laughed and took pictures.., and What Lies Behind, a performance/installation culled from dialogues of famous liars. Their video project, No food No money No jewels, was commissioned by the Experimental Media and Performing Art Center–EMPAC. Sussman and Lee are also acting as producers for Jack & Leigh Ruby, two reformed criminals, who are now making films and performances based on their previous career as confidence artists.

Sussman’s work has been shown in institutions and film festivals internationally, including exhibitions at the Reina Sofia in Madrid, The Museum of Modern Art in New York, The Whitney Museum in New York, The Louisiana Museum in Denmark, The National Gallery in London, Leeum Museum in Seoul, Korea, and Musée d’art Contemporain de Montréal. 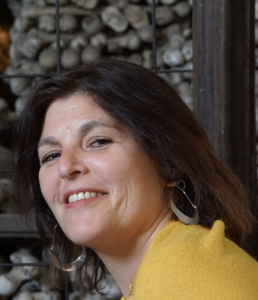 She carried out seminars and workshops on stage design and costumes

Also, she conducted sculpture, drawing and painting workshops, and courses in Costume History and History of contemporary art. She works as a cultural producer in the dissemination and visibility of Argentinian artistic and theatrical work. She is carrying out the integral production and distribution of independent artists, promoting and presenting their art more effectively in Argentina and abroad.

She works as an art director since 1997 in different media fields. She is taking responsibility as a production designer, art director, and costume designer for local and international projects.

University Professor since 2006, holds an Art Direction Chair at the Department of Audiovisual Arts at the National University of Arts (UNA). Where she also develops work as a categorized researcher.

She teaches several subjects in the careers of Cinematographic Art Direction and Show-Design at the Faculty of Design and Communication of the University of Palermo (UP) and the University of Belgrano (UB) in Buenos Aires, Argentina. She teaches Courses and Seminars on Art Direction and Image Design, in Argentina and abroad. She actively participates in the Congress of the area and has several published articles. 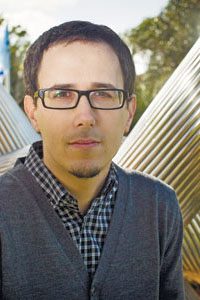 Lior Zalmanson is a writer, new media artist, curator, and researcher. He is currently an assistant professor at Tel Aviv University. His works focus on digital culture, online behavior, and the information society. In 2011, Lior founded the Print Screen Festival, Israel’s digital arts festival, which explores themes of digital culture in the audio-visual arts. Acting as the artistic director of Print Screen, Lior has curated dozens of new media exhibitions and performances. In regards to his own art practice, Lior’s first play, Yingale, won the Haifa Fringe festival in 2009 and was produced in both Israel and Serbia. His latest works in film, theatre, and new media were showcased at the Tribeca Film Festival, The Jewish Museum in New York, the Israel Museum in Jerusalem, and the 14 Street Y. In 2016, Lior joined to Metropolitan Museum Media Lab to curate “Intentionally Unfinished” symposium on the notion of unfinished-ness in the digital arts. Lior was also a Fulbright visiting scholar and lecturer to NYU, researching online engagement, participation, and maker-led practices of creative experimentation. His research and writings were published in Wired UK, Art & Science, and Sloan MIT Review, and have received the prestigious Dan David Prize Scholarship.